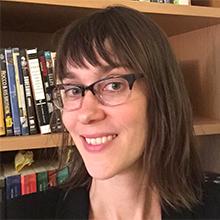 Elizabeth Alsop, Ph.D., is assistant professor and academic director of the communication and media program. She received her Ph.D. in Comparative Literature with a certificate in Film Studies from the CUNY Graduate Center, and has over ten years of experience teaching film and literature at institutions including Queens College and Hunter College, CUNY, and Western Kentucky University. More recently, she served as the assistant director of the Teaching and Learning Center at the Graduate Center, and helped lead the CUNY Humanities Alliance, a Mellon-funded grant designed to improve access to and equity within the humanities.

Her primary research interests include 20th-century American and British literature, narrative theory, and film and television studies. Her essays have appeared or are forthcoming in The Journal of Film and Video, The Velvet Light Trap, The Quarterly Review of Film and Video, Adaptation, College Literature, and Narrative; her current book, forthcoming from The Ohio State University Press, examines the role of character dialogue in the Anglo-American modernist novel. In addition to her scholarly work, she has also written about books, TV, and popular culture for publications including The Atlantic, The New York Times Magazine, Salon, The LA Review of Books, The TLS, and Bookforum.

CUNY Transformative Learning in the Humanities

Three faculty members in the CUNY SPS Communication and Media program have been selected as Andrew W. Mellon Transformative Learning in the Humanities (TLH) Faculty Fellows for the 2022-2023 academic year. Adjunct Assistant Professors Nina Hien and Dino Sossi, along with Assistant Professor and Academic Director Elizabeth Alsop, are among those selected for this cohort. TLH is a three-year initiative to support student-centered pedagogy and foster innovative teaching in the humanities across CUNY. 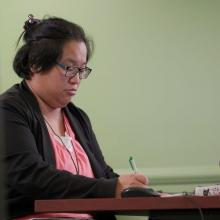 The webinars, which explored how to fund school and overcome imposter syndrome, are part of a series addressing the challenges first-generation college students face.

National Endowment for the Humanities

Dr. Elizabeth Alsop, assistant professor and academic director of communication and media, is the recipient of a 2022 National Endowment for the Humanities (NEH) Summer Stipend. The $6000 grant will support the writing of her book on the films of American director Elaine May, which is currently under contract with the University of Illinois Press.

Elizabeth Alsop, assistant professor and academic director of the CUNY SPS communication and media program, is pleased to announce her video essay, "The Television Will Not Be Summarized: Some Notes on Televisual Excess," was included in the 2021 Sight and Sound poll of best video essays. The video was originally published in [in]Transition, a peer-reviewed journal of videographic criticism.