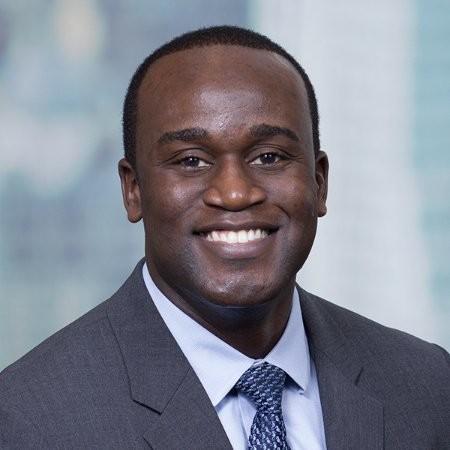 A Bronx native born to Nigerian parents, Donatus Anusionwu is a graduate of New York City public schools, the United States Military Academy at West Point, and Columbia Business School, and is also a decorated combat veteran of the Iraq war. He brings his vast business acumen and experience to the CUNY SPS Foundation Board of Directors, which is dedicated to exploring new opportunities that promote, support, and enhance the mission of CUNY SPS and its students.

Donatus is currently a director with Greensill Capital and is focused on deal origination and structuring. Previously, Donatus worked at Morgan Stanley for about four years within global capital markets, focusing on equity private placements. And, prior to Morgan Stanley, Donatus worked for five years in the corporate and investment banking division of J.P. Morgan with a focus on deal origination and leveraged credit lending within the technology, media, and telecommunications industry.

He is a 2002 graduate of the United States Military Academy (USMA) at West Point, where he received a bachelor of science degree in economics with a minor concentration in systems engineering. After graduation, he served on active duty for five years as a field artillery fire support officer engaged in readiness and combat operations in South Korea and Ar Ramadi, Iraq. Donatus was decorated with the Bronze Star Medal for meritorious service while deployed to Iraq. He also earned his master of business administration degree in 2009 with concentrations in finance and accounting from Columbia Business School.