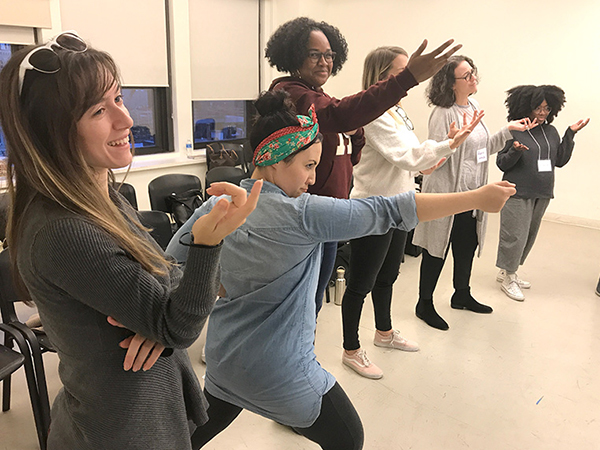 The CUNY School of Professional Studies (CUNY SPS) MA in Applied Theatre program hosted its fifth consecutive Racial Justice Conference on November 8 and 9, 2019.  The conference, Sign of the Times: The Role of the Arts and Education in Advancing Racial Equity and Combating White Supremacy, explored the issue of racial injustice framed by contemporary events and the approaching presidential election. Over 140 theatre professionals, educators, activists, and other artists at various stages of their career, as well as faculty, staff, and students, attended.

This November marks the first year that the conference, which originally began as an in-house workshop staged by the CUNY SPS Master of Arts in Applied Theatre program (MAAT), has opened its doors to participants from a broad range of arts and education communities across NYC and beyond.

Dr. H. "Herukhuti" Sharif Williams, an adjunct associate professor in the MAAT program and chair of the conference planning committee, explains the conference’s mission. “Because applied theatre, which is a more recent addition to the field, has a focus on social change and social justice, we have to have critical, honest, and thoughtful discussions of how our forms of theatre contribute to the racialized social violence with which mainstream American theatre colludes and how we can do things differently.” He continues, “As a member of the applied theatre program faculty and an applied theatre scholar-practitioner whose work is focused on dismantling white supremacy and creating racial equity, I want the conference to be an ongoing opportunity for other artists, educators, and activists to share the knowledge, wisdom, and resources gained from doing racial equity and anti-racism work.”

In keeping with this focus, the racial justice conference featured a number of performances, workshops, and a plenary panel discussion. The keynote panel, which was convened and moderated on the first day by Dr. Williams, featured six activist leaders from the fields of arts and education, all dedicated to the cause of racial equity and social justice. During the panel, the activists discussed the challenges and responsibilities of artists and educators in addressing racial inequities externally through their work, and internally within their own organizations.

The conference also featured a full agenda of workshop sessions that examined the challenges within a wide range of connected issues. Topics explored included white fragility, racial and neuro-diverse inclusion in the classroom, the contemporary role of the artist of color, translanguaging in the multilingual classroom, the emotional resonance of flag dancing, discussing race with youth, the decolonizing of source materials in school and college curricula, the embodied reading of scripts for reflection and liberation, and the use of Theatre of the Oppressed techniques to develop dialogue and creative action towards racial equity in the arts and education.

One session offered an opportunity for the newly formed CUNY SPS Institutional Equity and Diversity Committee to launch its work. This committee, which was created in response to the direction in the CUNY SPS 2015-2020 Strategic Plan, hosted a kick-off meeting with a workshop open to all faculty and staff that was led by the School’s chief diversity officer Sahana Gupta and the MAAT program’s assistant director Adeola Adegbola White. During the workshop, participants were asked to define ‘equity and inclusivity’ and then share their ideas about four topics (campus culture, CUNY SPS institutional identity, student involvement in campus culture and identity, and workplace engagement). Their responses will be used by the committee to define its goals and targets going forward.

Other conference highlights included a performance by viBE Theater Experience and presentations of Lacresha Berry’s one-woman show Tubman, which reimagines the story of Harriet Tubman, Girlz N’ Da Hood, an interactive piece hosted by Community Connections for Youth, and The Skin You’re In, a storytelling performance by Village Playback Theatre.

Chris Vine, director of the MAAT program, reflects on the excitement and call to action the conference has generated. “It is heartening how many of the attendees have spoken to me since the conference, to say how much they took away from it…. The purpose was not just to make us feel good but to bring creative and educational communities together, intent on recognizing and understanding the breadth and depth of the racial inequity and injustices that exist in this country—and find ways to take action to combat them. The question—and resolve—we wanted everyone to take away was, ‘What can I do, in my sphere of influence, big or small, to change things?’ We hope future conferences will continue to develop this active theme.”

About the Master of Arts in Applied Theatre

The MA in Applied Theatre degree program, the first program of its kind in the United States, uses theatre as a medium for education, community development, and the pursuit of social justice. The goal of the program is to educate scholar practitioners to become future leaders in the field of applied theatre. Applied Theatre involves the use of theatre and drama in a wide variety of nontraditional contexts and venues, such as in teaching, the justice system, health care, the political arena, community development, museums, and social service agencies.

The School’s growth has been remarkable, with twenty-three degrees launched since 2006. Enrollment has risen by more than 30% in the last four years to over 3,700 students in the credit-bearing programs and thousands more who are enrolled in non-degree and grant-funded workforce development programs. In addition, the School has an active Alumni network and has established the CUNY SPS Foundation, which offers multiple scholarship opportunities to current students.