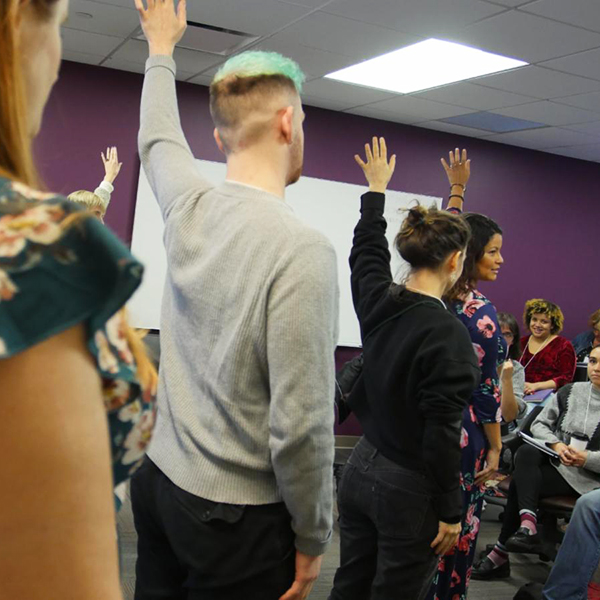 The CUNY School of Professional Studies (CUNY SPS) MA in Applied Theatre (MAAT) program hosted its 6th annual Applied Theatre & Racial Justice conference on Saturday November 7, preceded by a pre-conference geared towards the CUNY SPS community on Friday November 6. This year’s conference theme What Do We Do Now, 'Cause There's Work to Do focused on ways of engaging with the world that will emerge immediately after the presidential election and how performers can use arts and applied theatre to work for liberation and against repressive regimes.

“I am delighted and energized by the success of this year’s conference! ...[With the news of the presidential election results breaking that day], the conference recognized that it is more important than ever that we ‘seize the time’ and take action to combat the ongoing racial inequality and injustices that exist in this country,” said Chris Vine, academic director of the MAAT program. “This is not a once-a-year commitment but an everyday task. The MAAT looks forward to continuing the work, both in and beyond the CUNY SPS community.”

Organized by MAAT faculty H. "Herukhuti" Sharif Williams, assistant director Adeola Adegbola-White, Vine, and alum Esther Triggs-Camacho, who together worked to update the yearly conference into a virtual format, the conference featured presenters and participants from all over the country and world. Across multiple concurrent zoom sessions, attendees included at least 150 people comprised of MAAT students and alumni, CUNY SPS community members, and outside guests from the wider fields of applied theatre and racial justice.

The conference kicked off on a CUNY SPS-only pre-conference event on Friday November 6, when members of the CUNY SPS Committee on Institutional Equity and Diversity (CIED) led the CUNY SPS community in conversations about racial justice at the School. Later the CIED held a closed-door session with consultant Adetoro Ceballos, Diversity and Inclusion Senior Program Manager at Etsy, to continue their ongoing work. Two CUNY SPS graduate programs, Youth Studies and Museum Studies, held events later in the day for their students and communities. The day ended with an interactive workshop, “Race and You: Courageous Conversations,” facilitated by The Journey Theatre Project, a company founded by three MAAT alum with a mission to use theatre and creativity to help folks connect, grow, and learn.

On Saturday November 7, MAAT faculty member Daniel Banks opened the main conference with an interactive session that grounded the participants in the day’s work. Attendees chose from several simultaneous sessions throughout the morning and afternoon, including offerings from Theatre of the Oppressed NYC, The Angle Project,Blindspot Collective, and a number of current and former MAAT students. The discussions during the whole conference were influenced by the current news after attendees learned the results of the presidential election shortly after the start of Saturday’s sessions. Throughout the day, presenters reminded the participants of the work that lies ahead in building a more just world, even as they heard the sounds of celebration outside their own windows.

Spirits remained high, with many participants commenting on the liveliness and urgency of the presentations, performances, and dialogue, as they expressed their appreciation and excitement for the conference. Actress and artist Arielle Siler said “This filled my spirit …the best celebration today …This brings me hope.” Freelance actor and director Sarah Bogomolny observed, “Thank you for a great day of thought-provoking work & conversations.” Liz Morgan of the Theatre of the Oppressed NYC (TONYC) remarked, “Thanks so much for inviting TONYC to present at this conference again…What an honor to be with y'all during this historic moment.”

About the Master of Arts in Applied Theatre

The MA in Applied Theatre degree program, the first program of its kind in the United States, uses theatre as a medium for education, community development, and the pursuit of social justice. The goal of the program is to educate scholar practitioners to become future leaders in the field of applied theatre. Applied Theatre involves the use of theatre and drama in a wide variety of nontraditional contexts and venues, such as in teaching, the justice system, health care, the political arena, community development, museums, and social service agencies.