CUNY SPS Is Once Again Ranked Among Top in the Nation by U.S. News 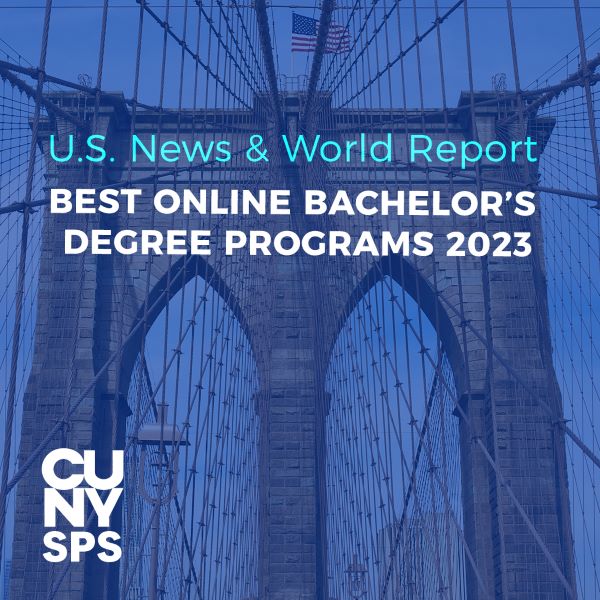 For the eighth year running, the CUNY School of Professional Studies (CUNY SPS) has been ranked among the country’s top online schools by U.S. News & World Report.

This year, CUNY SPS was ranked #11 in the nation out of more than 380 schools on U.S. News & World Report’s 2023 list of Best Online Bachelor’s Programs, with a score of 94 out of 100. The School also remains the highest listed in New York City and New York State.

CUNY SPS was also awarded other top ratings by the publisher. For the second year in a row, U.S. News & World Report ranked the School #5 in the nation on the list of its Best Online Bachelor’s Programs for Veterans.

Additionally, the CUNY SPS BA in Psychology was ranked #4 in the nation on the publisher’s 2023 list of Best Online Bachelor’s Programs in Psychology, marking the third year that the program was listed in the top ten.

“CUNY SPS continues to distinguish itself as a nationwide leader in online education and this recognition is further testament to the quality, accessibility, and affordability of its academic offerings,” said CUNY Chancellor Félix V. Matos Rodríguez. “We are proud of the longstanding success of CUNY SPS in delivering courses, credentials, and degrees that have a direct and positive impact on our students’ career trajectories and, importantly, in sustaining the flexibility of these offerings to accommodate the increasingly complicated lives of working adults.”

“These rankings by U.S. News & World Report confirm what we’ve heard again and again from our students—that CUNY SPS’s well-honed, affordable, and accessible online degree programs offer them a great education at a fraction of the cost of private college,” said CUNY SPS Interim Dean Jorge Silva-Puras. “As a School devoted to helping working adults earn their college degrees, we couldn’t be more pleased by this public acknowledgement of our efforts.”

Edith Mejia, a student in the BS in Health Services Administration program, is one of many working adults who has benefitted from CUNY SPS’s top-rated, flexible, and low-cost online programs. For Mejia, a working mom who returned to college to pursue her dream of becoming a healthcare administrator, CUNY SPS was a great fit.

“Earning my bachelor’s degree has been a long-time dream of mine. My kids are older now and I have fewer responsibilities, so I felt that it was the right time since I can focus on my school and work,” Mejia said. “I chose to continue my education online because I needed a school flexible enough to match my work schedule. After doing my research I chose CUNY SPS because of its good reputation.”

CUNY SPS’s dedication to veterans was also acknowledged by U.S. News & World Report, which ranked the School no. 5 out of 98 schools on their list of Best Online Bachelor’s Programs for Veterans. This rating recognizes the many services and resources provided by CUNY SPS, which include financial assistance like the U.S. Military Bachelor’s Degree Completion Scholarship, to address the specific needs of active military and veteran students.

John Long, a former marine and graduate of the BA in Communications and Media program, now works at the CUNY SPS Office of Military and Veteran Student Services (OMVSS) where he helps this student population navigate the sometimes-tricky path back to college.

As he explains, CUNY SPS is there for them. “Anyone who has served knows that your time is not your own, and the needs of the service often take precedence over everything else,” Long said. “CUNY SPS gives these students the flexible academic path and understanding faculty that they need in order to achieve their educational goals.”

As New York's leading online school since 2006, the CUNY School of Professional Studies (CUNY SPS) offers the most online bachelor's and master's degree options at the City University of New York, and serves as the University's first undergraduate all-transfer college. With 26 degrees and numerous other non-degree and grant-funded workplace learning programs, CUNY SPS meets the needs of adults who wish to finish a bachelor's degree, progress from an associate's degree, earn a master's degree or certificate in a specialized field, and advance in the workplace or change careers. Consistently ranked highly by U.S. News & World Report for its online offerings, CUNY SPS has emerged as a nationwide leader in online education. The School's renowned and affordable online programs ensure that busy working adults may fulfill their educational goals on their own time and schedule.