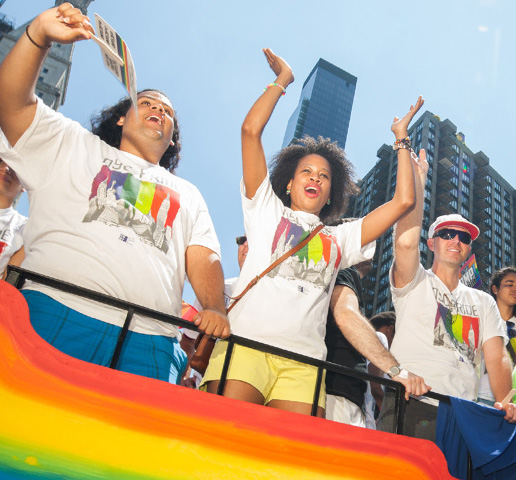 This story was reported first on CUNY.edu.

As a university whose mission is steeped in diversity and social justice, the City University of New York has a rich history of involvement with the LGBTQ rights movement. CUNY is home to the nation’s first university-based research center dedicated to the history, culture, politics, oppression and affirmation of the LGBTQ community. The center’s founder is an eminent CUNY historian, playwright and activist who wrote the seminal book about the 1969 Stonewall riots in Greenwich Village, the gay rights movement’s catalyzing event. And for decades, members of the CUNY community throughout the city have worked on behalf of LGBTQ people as health researchers, educators, writers and advocates.

Now, as the city, the nation and countries around the world celebrate Pride Month and mark the 50th anniversary of Stonewall, CUNY salutes faculty, staff, students and alumni who have helped advance LGBTQ rights – from leading lights of the movement to unsung activists and professionals.

“The City University of New York is proud to be an integral part of the past and present history of the LGBTQ rights movement,” said Chancellor Félix V. Matos Rodríguez. “CUNY students, faculty and staff are working every day to raise awareness and support for the LGBTQ community through research, teaching and advocacy. There is much more that needs to be accomplished and we pledge our continued support but on this 50th anniversary of Stonewall, I salute all those who have been part of the struggle for full equality for the LGBTQ community.”

Among the country’s most influential gay-rights scholars and advocates of the past 50 years is Martin Duberman, a distinguished professor of history emeritus at Lehman College and The Graduate Center whose many books include the classic Stonewall (1994). It was 50 years ago this month that patrons and supporters of the Stonewall Inn staged an uprising to protest police harassment and brutality. The incident sparked a global gay rights movement and led to the designation of June as Pride Month each year. The New York City Pride March, one of the world’s largest, will be held on June 30.

In a revised edition of his book published this month, now titled Stonewall: The Definitive Story of the LGBTQ Rights Uprising that Changed America, Duberman, 88, reflects on the balancing act of celebrating the dramatic advances since Stonewall and recognizing and addressing where the movement has fallen short. “In the past half century we’ve gone from being all but uniformly pathologized and condemned—yes, even hunted—to being widely accepted as a legitimate minority,” Duberman wrote. But at the same time, despite progress such as marriage equality, he calls for a return to the “radical spirit” of the early movement to counter new perils: “Today, as LGBTQ people in the United States and abroad look on aghast while courts and politicians move with a renewed boldness to strip what rights we have, we would do well to remember the roots of the modern gay liberation movement… ”

Duberman, who came out publicly in an essay in The New York Times three years after Stonewall, founded the Center for Lesbian and Gay Studies (CLAGS), the first university-based research center of its kind in the country, at CUNY in 1991. In addition to his prolific writing, Duberman was a founding board member of the National Lesbian and Gay Task Force and the Lambda Legal Defense Fund, among other roles that put him at the forefront of the gay rights movement nationally for decades. The New Yorker’s Masha Gessen recently described him as “a national treasure.”

CLAGS, now called the Center for LGBTQ Studies and housed at the Graduate Center, continues the mission Duberman started, sponsoring public programs and conferences, offering fellowships to scholars and serving as a national center for the promotion of scholarship that fosters social change. “CLAGS has always been a space for building and supporting the LGBTQ community and we’re still staying true to that mission,” said the center’s current executive director, Justin Brown.

Apart from CLAGS, Duberman and his Stonewall-era colleagues spawned a legacy that continues to reach across CUNY. A second academic center, the LGBT Public Policy Center, was created at Hunter College in 2008 to support research to inform public policy decisions on LGBTQ issues.

Later this month, the Center will present four outstanding thinkers, writers and activists – Ann Pellegrini, Rich Benjamin, Chase Strangio, and Edmund White – who will assess the movement’s extraordinary accomplishments since 1969 and pinpoint its policy goals for the coming decade. Part of Hunter’s series “Policies of Pride: Stonewall at 50,” the program will take place at Roosevelt House, 47-49 E. 65th St., on June 27 at 6 p.m. (Those interested in attending should email rhrsvp@hunter.cuny.edu.)

At the Craig Newmark Graduate School of Journalism at CUNY, students have produced “After Stonewall,” a series of reported stories that offer a glimpse into how the LGBTQ community has developed and transformed within America’s various cultural, social, physical and political spaces. The project examines the community’s adaptation to changes in the landscape 50 years after the uprisings, focusing on such developments as the return of anti-LGBTQ military policies; the expansion of anti-HIV medications and digital dating apps; a rise in athletes and entertainment figures who have come out publicly; and an increased commodification of LGBTQ culture.

Meanwhile, resource centers serve the needs of LGBTQ students on four CUNY campuses: The College of Staten Island (CSI), Brooklyn College, LaGuardia Community College and the newest one at Bronx Community College, which opened in Fall 2018. The centers offer support and provide safe spaces for students to congregate and talk. CSI’s center develops programs that raise awareness of LGBTQ issues on campus, such as hosting National Coming Out Day and an annual pride event in the fall. The CSI students also just published a new magazine titled Queerzine, featuring personal narratives, fiction, poetry and artwork.

CSI, Bronx Community College and John Jay College of Criminal Justice also conduct Lavender Graduations, a ceremony that has taken hold nationally where students can be recognized as members of the LGBTQ community and acknowledged for overcoming adversity. “At the Lavender Graduation we can honor them for their full selves,” said Jeremiah Jurkiewicz, the LGBTQ Resource Center/Pluralism & Diversity Coordinator at CSI, which recently held its eighth ceremony.

Queens College, meanwhile, will hold its second annual CUNY Pridefest on the campus quad on the afternoon of June 20. The event will include a program on the 50th anniversary of the Stonewall uprising, a campus Pride march, student musical and dance performances and other activities.

The CUNY community includes a number of LGBTQ people who have played significant roles in the struggles for equality over the decades.

Victoria Cruz, a 1982 graduate of Brooklyn College, was one of many transgender women who participated in the Stonewall rebellion and is recognized as one of the founding activists of the gay rights movement. She’s also long been a prominent advocate for transgender people who are victims of crime. For her work with the New York City Anti-Violence Project, she was honored in 2012 as the first transgender woman of color to receive the United States Justice Department’s Crime Victim Service Award. She has returned to Brooklyn College several times to speak and to support LGBTQ students, including a recent panel discussion of transgender activism before and after Stonewall. The program was part of a year-long series of “Stonewall 50” events at the college.

Tanya Domi, the media relations director at the CUNY Graduate Center, is a veteran and activist whose military experience led her to become a leading advocate for the repeal of policies that banned openly gay people from serving in the armed forces. Domi served in the Army for 15 years and was later the director of the Military Freedom Initiative of the National Gay, Lesbian and Transgender Task Force. At a Congressional hearing in 1993, she testified in support of a complete revocation of the policy banning gay people from serving in the U.S. military, and she continued the fight against the Clinton administration’s “Don’t Ask, Don’t Tell” policy for many years until it was abandoned by President Obama in 2011.

“When I look back at when I came out in 1974 and all that I went through during my Army career – the investigations and humiliations and my bittersweet departure – I could never have fathomed the transformation of American society that emerged following the revocation of Don’t Ask, Don’t Tell,” Domi said. “The challenges remain in the quest to be accepted as an LGBTQ person here in America and around the world … but I will celebrate with joy the Stonewall 50th anniversary here in New York, my hometown.”

The City University of New York is the nation’s leading urban public university. Founded in 1847, CUNY counts 13 Nobel Prize and 24 MacArthur (“Genius”) grant winners among its alumni. CUNY students, alumni and faculty have garnered scores of other prestigious honors over the years in recognition of historic contributions to the advancement of the sciences, business, the arts and myriad other fields. The University comprises 25 institutions: 11 senior colleges, seven community colleges, William E. Macaulay Honors College at CUNY, CUNY Graduate Center, Craig Newmark Graduate School of Journalism at CUNY, CUNY School of Labor and Urban Studies, CUNY School of Law, CUNY School of Professional Studies and CUNY Graduate School of Public Health and Health Policy. The University serves more than 275,000 degree-seeking students. CUNY offers online baccalaureate and master’s degrees through the School of Professional Studies.