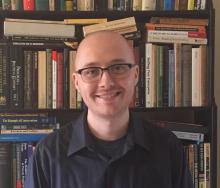 "Our understanding of how we relate to each other and why is really invaluable I think, especially as the world becomes increasingly interconnected across geography and culture."

Currently I am working as a research assistant under the direction of two economists, Dr. William Lazonick and Dr. Philip Moss of UMass, Lowell. This is also functioning as my Internship for my Bachelor’s of sociology at CUNY SPS. The work we are doing concerns the economic progress, or lack thereof, among African-Americans since the Civil Rights Act and the establishment of the Equal Employment Opportunity Commission (EEOC). The project is organized by The Academic-Industry Research Network (theAIRnet), which is a private, 501(c)(3) not-for-profit research organization dedicated to partnering academic scholars and industry experts to enhance industrial innovation and sustainable, equitable economic growth. Dr. Lazonick is the President and Dr. Moss is an Associate of theAIRnet. The project is also funded by the Institute for New Economic Thinking (INET), a nonpartisan, nonprofit grant making organization that was formed in 2009 following the financial crisis, or Great Recession as it’s come to be called. The research can be broadly categorized under the discipline of labor economics, which has significant overlap with the sociological disciplines of economic sociology, historical sociology, and organizational theory. The work I’m doing under their direction is extremely important in terms of understanding the challenges and potential strategies for improving the lives of the many individuals and communities that remain in so clearly economically deprived. If we recall the history of the Civil Rights movement, Dr. King was organizing a poor peoples’ campaign at the time of his assassination. Unfortunately, there has been little progress, and some would argue a reversal of progress, in this regard over the past fifty years. That I can work with scholars at the top of their field and contribute in some small way to remedying these very serious issues is, of course, extremely gratifying. The most difficult aspect is the accelerated learning process I’ve experienced. The project has required me to read material across social science disciplines. Developing the ability to move between the literature of these varying (and often conflicting) schools of thought has been challenging, though also very gratifying. The experience has, without question, significantly enhanced my intellectual and professional development.

Why did you choose to earn your bachelor’s degree in sociology at CUNY SPS?  Why an online program?

I chose CUNY SPS because I believe in the importance of public universities and CUNY more generally afforded access to exceptional faculty at a comparatively low cost. The online program appealed to me because, at the time of my consideration, my wife and I were considering a move and it allowed me to continue my studies regardless of location.

Did you ever think that you would enroll in an online degree program? What has your experience been with online learning at CUNY SPS?

I had not considered an online degree program beforehand. My preference has always been person-to-person learning. My experience at CUNY SPS has demonstrated that online learning can be just as beneficial. It of course requires some adjustment, but it also affords me the ability to arrange much of my class work around my own schedule, which can be extremely useful when other obligations arise as they invariably do.

What motivated you to return to school to complete your bachelor’s degree?

I had first moved to New York City in 2010. I was doing some work in recording studios in Brooklyn and while doing so the Occupy Wall Street protests came out of nowhere. I realized as I was in a historically significant moment, so I would frequent Zuccotti Park and talk to people. After a certain point I realized I was more interested in what was happening socially there and how it related to the wider political economy than I was in the studio work I was doing. After that I started reading whatever reputable material I could find until I decided I wanted to go back to school to study the social sciences. As a discipline, sociology afforded me the most intellectual freedom in pursuing that goal. Over time I’ve gravitated towards the more specific study of organizations, economic and political. When I started in the program, however, I was less certain of my preferred area of specialization. Starting with sociology, rather than say economics or political science, allows one to move in pretty much any direction within the social sciences.

What has been one of your favorite courses?  Favorite professors?

There are several courses that have proven invaluable to my intellectual growth. The first course I took at CUNY SPS that I gained the most from was Critical Thinking with Dr. Michael Fitzgerald, Professor of Philosophy. The course is a general education option and is basically a primer on informal logic. I was familiar with a fair amount of the ideas, but had never worked on it in great detail. Since then it has become increasingly evident to me how important a course that was for me. Frankly, I think courses of that type should be part of every high school and college curriculum. For a democratic society to function properly the average citizen needs to know what constitutes an argument, what qualifies as serious evidence. These principals are foundational for a decent understanding of almost any phenomenon imaginable. Another really remarkable course in general education was Ascent of Man with Dr. Joseph Dauben, Professor of History. The course is an introduction to the history of science and is based on the Jacob Bronowski book and BBC series of the same name. In my view, this is another course that provides really foundational material. Of course, it was extremely beneficial to me for an understanding how scientific thought developed and advanced. However, these are matters that demand the attention of anyone living in the increasingly technologically advanced society that we currently find ourselves in. The core message of the course, which is most clearly reflected in the material by Bronowski, is that science is a human invention. It’s one of many manifestations of our innate creative capacity. It’s also highly democratic in that anyone who understands the principles on which the scientific methods rests can employ it as a tool. That’s a very different sentiment than the widely held, though I think false notion that science and technology solve problems for us. People are the drivers scientific and technological advance. The differing goals and values of the individuals involved, therefore, result in different technologies and understandings of the worldly phenomena. Once one understands that science is a tool that humans use to solve particular problems it makes it abundantly clear how important it is that we employ that tool wisely, and have it be guided by a coherent moral framework rather than have it be used to for the benefit of a few at the expense of others.

Concerning the core curriculum, a course I took that had a big impression on me was Foundations of Sociological Theory with Dr. Barbara Walters, the Academic Director of the Sociology program at CUNY SPS. The course is part of the sociology curriculum and pushed me in really important directions in terms of understanding the history and development of sociological thought. It’s not sufficient to simply know the analytic framework of a given thinker or school of thought. For a serious understanding of the field one has to look at the historically contextual circumstances under which a particular theory was developed. Who developed it? What was the available evidence at the time? What was the intellectual history up to that point? What was the theorists biography? Being a relatively young discipline, having originated formally in the late 19th century, there is a lot of room for growth. Our understanding of how we relate to each other and why is really invaluable I think, especially as the world becomes increasingly interconnected across geography and culture. Other courses in the sociology curriculum that were quite excellent include Dr. David Halle’s course on Urban Sociology, which can easily draw and sustain the interest of anyone living or having lived in an urban area. According to most projections I’ve seen the global population is becoming increasingly urban, so an understanding of human behavior in such an environment is extremely important in our increasingly interconnected world. Cities like New York have complex histories, cultures, communities, and institutional structures. That course really pushed me toward a greater understanding the City as whole and how to aid in solving the very real problems that confront human beings in such a complex environment. Other courses in the core curriculum include Sociology of Education, which I took with Professor Sara Vogel and Advanced Quantitative Analysis, which I’m taking with Professor Melanie Lorek. How a society conceives of and executes the practice of education is obviously extremely important. This is one reason that what is or is not taught in public schools is often such a contentious topic in culturally diverse countries like the United States. Advanced Quantitative Analysis has been really critical in giving me a foundation in statistical methods. As computer technology has advanced into the era of “big data,” social science researchers and practitioners have become increasingly reliant on data analysis to provide empirical support for their ideas. This course provides a great foundation in both the theoretical and practical aspects of data analysis, such as learning statistical programs like IBM SPSS. These are skills that can transfer across disciplines and professions.

Which professional and/or personal goals would you like to achieve prior to graduation?

My primary goals are to increase my understanding of quantitative methods, develop my thesis into a piece of serious scholarship worthy of note, and assistant and work with faculty and my research advisors while learning as much as I can from them in the process before applying to graduate school.

How have you grown as a result of your studies at CUNY SPS?

As a result of my studies at CUNY SPS I have undoubtedly grown both as a human being and in terms of my intellectual development. As discussed earlier, the courses at CUNY SPS, in my view, really exemplify the principles of critical inquiry within a broader moral framework.

What advice would you offer someone considering applying for admission to the BA in Sociology program?

CUNY SPS has a remarkable faculty. My experience has been that I’ve gotten out of it what I put in. Every professor I’ve studied under has gone out of their way to help me gain a better understanding of the material at hand so long as I made a point to ask and delivered on my end. For anyone interested in gaining a serious, well-rounded education I can’t recommend CUNY SPS enough.

Joshua also provided a few fun facts about himself:

Read more about Bachelor of Arts in Sociology