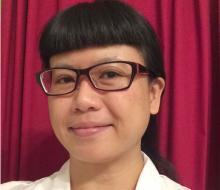 "I learned that rather than being a liability, my age was a blessing, as my work ethic, professionalism, and ability to self-manage were vital to my success at going to school and working simultaneously."

For over 20 years, I was a graphic designer. I worked with an educational company, a humor newspaper, a nonprofit, an exhibit maker, and a restaurant group, in addition to freelancing throughout all and in between. I’ve made textbooks, junk mail, and advertising. I was okay at it, not great, but it was a living. It took a layoff for me to realize that my heart wasn’t in it. Having worked almost exclusively in print, I tried retraining to do electronic design, but my lack of enthusiasm quickly became evident. But what could I do? I had gone to school for art, and there weren’t a lot of options with that background.

In Summer 2011, I began my slow journey to nursing by taking a nutrition class at Hunter College. Biology, chemistry, anatomy and physiology, statistics — each successive prerequisite was so out of my comfort zone, so left-brained, that I constantly asked myself what I was doing. I learned a lot of things about myself and about my upbringing by going to nursing school. For one thing, I learned that I didn’t have to be right-brained or left-brained; I could be both. I did a lot better at math and science once I stopped telling myself I was bad at math and science. I learned that I have a great deal of critical thinking skills and that not everyone had developed these. I learned that rather than being a liability, my age was a blessing, as my work ethic, professionalism, and ability to self-manage were vital to my success at going to school and working simultaneously.

I also learned that I suffered from anxiety.

I almost didn’t make it through the RN program at LaGuardia Community College. I failed Medical-Surgical Nursing II, because I tested horribly. My professors were surprised every time, because I knew what I was doing in class, asked very smart questions, had good clinical judgment, and was diligent. The problem was I also catastrophized every time I didn’t immediately know an answer to a test question. Every time I couldn’t answer, “which orange is the most orange?” within the first ten seconds, I asked myself what I was doing, who I thought I was, how I was going to go hungry without a job, and that fact that I did not have a Plan C. To make matters worse, the candidate who espoused sexual and racial violence somehow won the presidency. Walking home from class at night, I fully expected to be assaulted by one of his newly emboldened supporters. I walked around with balled-up fists, out of fear and anger. After failing Med-Surg II, I happened upon an article about anxiety in which I learned one of the lesser-recognized symptoms is anger. Suddenly, I put all the pieces together. I talked to my general practitioner (a student himself) and started on Lexapro. I passed and graduated in December 2017 and passed the NCLEX in 75 questions three months later.

I just turned 47 this month and am now a nurse at Planned Parenthood, an organization I’ve supported for decades. A great deal of my job involves soothing patients’ anxiety and letting them know that their feelings are valid and normal, and that abortion is self-care. It’s a job that combines feminism, compassion, helping the underserved, and making other people’s lives easier. It hits so many parts of my personality that it seems tailor-made for me. Next semester I will earn my BSN at CUNY School of Professional Studies with a capstone project that we’ll be able to use at Planned Parenthood to provide better care. I couldn’t have asked for a better second act.

Read more about Bachelor of Science in Nursing