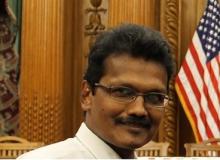 "I am now practicing immigration law in immigration court. There was no greater feeling than when I walked into court for the first time. If I had never gone back to court after that day, I would have accomplished what I set out to do."

Ben Anthony (Advanced Certificate in Immigration Law, '15) is the executive director of IT and also runs Immigration Legal Services at Bible Fellowship Pentecostal Assembly. We recently asked Ben about his experience as a CUNY SPS student, life since receiving his advanced certificate and his goals. Here are a few excerpts from our conversation.

Q: Why did you choose CUNY SPS?

This was the only institution offering a master’s level certificate in Immigration Law.

Q: What most appealed to you about your CUNY SPS program?

The dedication of the faculty to the subject of Immigration Law and the relevancy of the curriculum.

Q: How did you find your online/classroom interaction with other students? With faculty?

I believe this was an awesome experience. At first it was intimidating, but the care, concern, and support of my fellow students and staff were beyond comprehension. It became a community who shared the same values, and with the same goals and objectives in mind. We became a family, and some of us remain friends even after the class is over.

Q: What were some of the most defining aspects of your time at CUNY SPS?

Reviewing postings from fellow students in response to assignments, presenting opposing arguments with propositions, then having to defend your own presentation. This was a lot of fun, educational, and there was lots to learn from others. The conclusion was when the professor would review and issue his/her take on the whole matter.

Q: What is the most important thing you learned at CUNY SPS?

Basically, most things we need to know about immigration laws and practice.

Q: How has your CUNY SPS advanced certificate influenced your career?

Armed with my CUNY SPS certificate and my legal writing skills, which have tremendously improved after taking Professor Mulligan’s class, I applied to the Board of Immigration Appeals for full accreditation to practice, not only before DHS (Department of Homeland Security) but also the EOIR (Executive Office for Immigration Review) / BIA (Board of Immigration Appeals). I am now practicing immigration law in immigration court. There was no greater feeling than when I walked into court for the first time to represent someone with my briefcase and presented my EIOR-28 form (Notice of Entry of Appearance as Attorney or Representative before the Immigration Court) to the immigration judge. Nervous but defining. If I had never gone back to court after that day, I would have accomplished what I set out to do: practice immigration law by helping indigent individuals who could not pay their attorneys anymore. I have since written briefs and motions and presented arguments, and every time I sit to write, I always recall what I learned from Judge Mulligan about writing etc., thanks to CUNY SPS.

Q: What is the most rewarding aspect of your job?

Helping indigent people, representing them before DHS, EOIR, and BIA. Getting approval on difficult cases after much research and writing and presenting my arguments, either before judges or DHS officers.  For example, last year I got back-to-back extensions for a woman, a non-immigrant with a three-year-old son with leukemia who could not afford what the attorneys quoted for the extensions process. She did it herself and there was an RFE. So someone recommended my organization, and I took her case. I responded to USCIS (United States Citizenship and Immigration Services) on the RFE (Request for Evidence) and succeeded in getting her two extensions. I am currently awaiting approval of a third.

Q: Where do you see yourself in five years?

Continuing on the path I am on, doing the things I have been doing to make a difference. I am the IT director of my company, so I am very busy in the corporate world. Hopefully, in five years I may retire and will definitely practice immigration law full time. I would love to pursue a full master’s degree in law but since I do not have a JD, I may not be able to do so. However, if CUNY decides, and I am hoping they do, to design a curriculum for a master’s degree in immigration law, I will be the first student on board.